The power of Cardano

CARDANO ALONZO HARD FORK AND THE CHANGES IT BRINGS  TO NETWORK

Cardano is a decentralized currency founded by Charles Hoskinson, a mathematician and the former CEO of Ethereum. He is also the founder and the current CEO of blockchain company Input Output Hong Kong (IOHK).

Cardano is an open-source blockchain built based on peer-reviewed studies. This has led it to be considered the “first scientific blockchain in the crypto world”. It was named after an Italian polymath Gerolamo Cardano and the native token ADA was named after an English mathematician Ada Lovelace.

MECHANISM OF THE OUROBOROS SYSTEM

Bitcoin adopts the PoW (Proof of Work) system which allows anyone to mine new blocks, this wastes a lot of computing power and a lot of electricity. As mentioned earlier Cardano makes use of the Ouroboros system.

Ouroboros is an algorithm that uses the PoS (Proof of System) system in mining new blocks. This helps to reduce energy expenditure during block production to the minimum by eliminating the mass computing result that is the heart of the PoW used by Bitcoin.

The Ouroboro system works by dividing the chains into Epochs. These Epochs are then subdivided into Slots, each slot having a slot leader. The Epoch works in a continuous cyclic motion, whereby when a motion ends, another starts.

The Slot leader is selected by a ‘lottery system’ and the system is always in favour of whoever has the highest number of staking.

A Slot leader has the following responsibilities:

Cardano aims to solve the  issues of the first two generations of  blockchain (Bitcoin and Ethereum) which are :-

Scalabity– Cardano adopts RINA(Recursive Internetwork Architecture) to scale its network. In order for a cryptocurrency to be accepted as a global means of payment, it should be able to accept a lot of transactions per second. The Cardano Ouroboros system solves this by adopting the Proof-of-stake (PoS) system instead of the Proof-of-work (PoW). Scalable systems are fast and more efficient, which is what is required of blockchain to handle production level processing of transactions.

Interoperability– This relates to the portability of a cryptocurrency both within its natural ecosystem and its interface with the existing global finance ecosystem.Currently many blockchains do not relate with one another,Cardano aims to enable this cross chain transfers through side chains which conduct transactions between two parties off chain.

Sustainability– This deals with governance structures which provides incentives to miners and stakeholders and also about evolving a self-sustaining economic model for the cryptocurrency. It also aims to build what is called a ‘constitution’ of protocols to avoid messy hard forks.

The Cardano Alonzo Upgrade is scheduled for the 12th of September 2021 as revealed by Nigel Hemsley,Head of Delivery and Project IOHK. This upgrade aims to bring smart contracts to Cardano through a hard fork combinator (HFC) event. The implementation has been slowly upgraded with coloured stages, Purple being the final stage.

The name Alonzo is derived from the mathematician and computer scientist Alonzo Church.

Cardano is close to expanding its already large Ecosystem of users through the implementation of smart contracts and multi-asset functionalities from the upgrade.

Also depending on how the upgrade goes, investors expect developers to flock around this new functionality or stay away from it.

Also, while the biggest feature emanating from Alonso upgrade will be smart  contract and Defi, the upgrade also aims to promote concepts like tokenization and non-fungible token ideas. Additionally, ERC20 tokens derived from Ethereum will be able to be leveraged on the Cardano chain.

Cardano has become the third largest cryptocurrency by MarketCap ($88,805,129,320) as at time of writing this article with a current price of about $2.78.

Market Cap is derived by multiplying the Current price by the Circulating Supply. 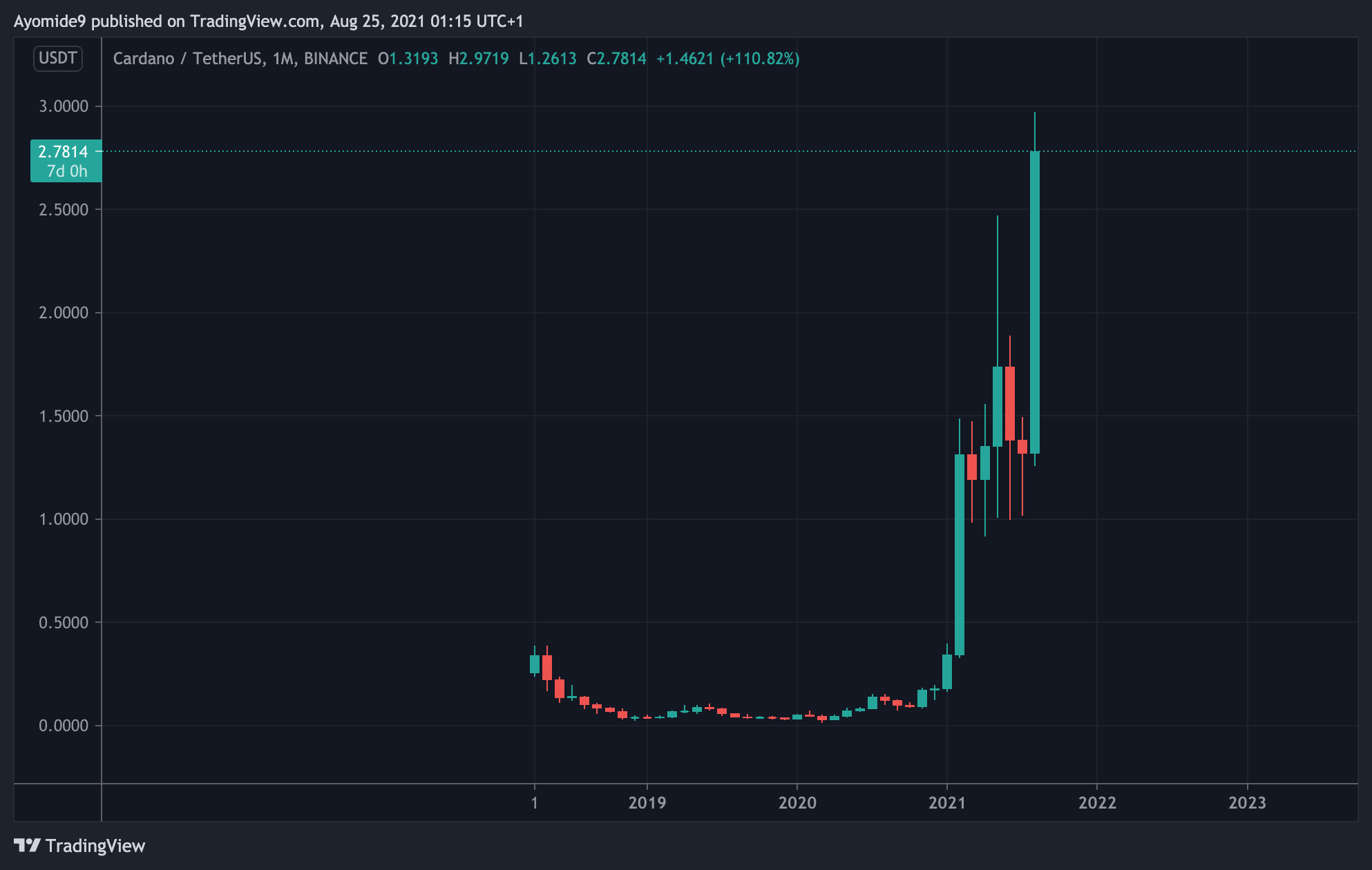 WHERE TO BUY CARDANO AND HOW TO STORE IT?

Cardano can be bought on various exchanges like  Binance, Ftx, KuCoin, Bittrex, Huobi and so many more exchanges.

Since it is not saved storing your assets on exchanges as they are large targets for hackers, ADA can be stored in Daedalus which is the official wallet created by the Cardano team. The wallet has some strong security features; however, it is not yet available on all device types.

ADA coins can also be stored in Ledger Nano wallets.

Cardano is a very ambitious blockchain project that is quite unique in its methodical approach to development. Cardano’s blockchain intends to expand beyond coins into a control layer that will provide services absent in the cryptocurrency ecosystem today.

The university gives no warranty and accepts no responsibility or liability for the accuracy or the completeness of the information and materials contained in this website as this is not financial advice.

Where to earn a cryptocurrency degree online in 2023

The increased acceptance of Bitcoin and other cryptocurrencies across the world has fueled a strong desire to learn crypto and...

END_OF_DOCUMENT_TOKEN_TO_BE_REPLACED

How to trade crypto in 2023 – A cryptocurrency trading training

Due to the introduction of blockchain technology and the growing acceptance of digital assets by the general public, the...

END_OF_DOCUMENT_TOKEN_TO_BE_REPLACED

Although it involves some risk, trading cryptocurrencies may be a very significant way to make money daily. With the use of...

END_OF_DOCUMENT_TOKEN_TO_BE_REPLACED
We use cookies on our website to give you the most relevant experience by remembering your preferences and repeat visits. By clicking “Accept”, you consent to the use of ALL the cookies.
Do not sell my personal information.
Cookie SettingsAccept
Manage consent